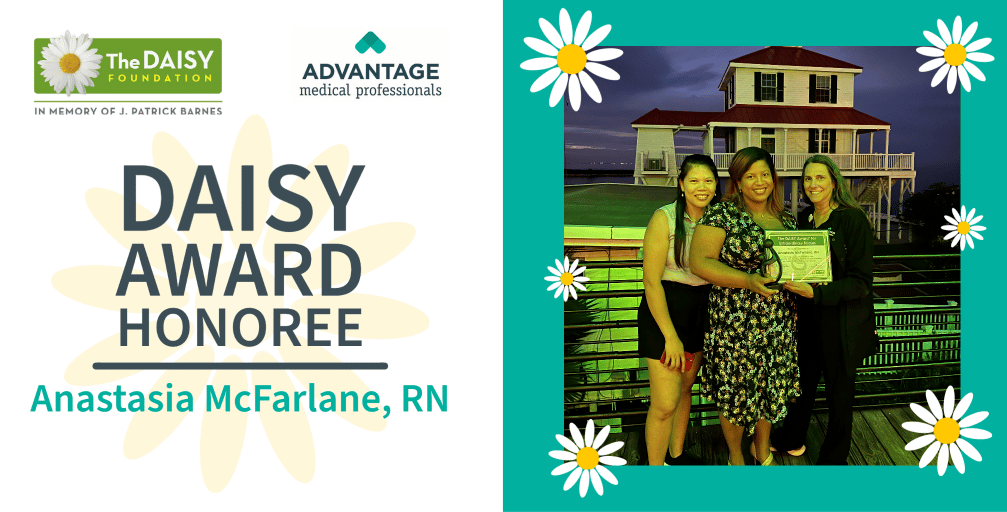 The Advantage Medical Professionals team recently held a ceremony to honor their most recent Daisy Award recipient in New Orleans, Louisiana. Inspired by the quality care he received when hospitalized, this award was created in memory of Patrick Barnes, who died from complications of Idiopathic Thrombocytopenic Purpura (ITP) in 1999. Currently, more than 4,800 healthcare facilities and schools of nursing participate in the Daisy 29 countries worldwide.

Anastasia McFarlane, RN was recognized for her efforts to aid a young child and his mother just moments after the child sustained a life-threatening injury in a New Orleans area shopping center parking lot this past July. The incident involved a young toddler boy who unintentionally shot himself with a firearm that was stored inside the vehicle. Anastasia was just leaving the same parking lot when she heard the gunshot that she initially thought was a firecracker. As she continued backing out of the parking lot, she quickly realized what she heard was not a firecracker after seeing a frantic woman with a small child bleeding in her arms. Anastasia immediately ran to assist, leaving her car running with the door open. EMS still hadn’t arrived by the time Anastasia administered first aid to the child, so it was quickly determined the boy’s best chance for survival was for his family to immediately drive him in their own car to a hospital that was fortunately located nearby. Once they sped toward the hospital, Anastasia quickly washed her hands at a salon in the shopping center and hopped back in her still running car  to report to Ochsner for her nursing shift. She had just started her travel nursing assignment there the day before, and she was concerned her late arrival due to the incident would land her in hot water with her new supervisors. Luckily, just the opposite happened – they were both amazed and grateful for Anastasia’s quick actions to attempt to save the child’s life. Anastasia was relieved when she later learned the child was expected to recover.

Anastasia was nominated for the Daisy Award by her healthcare facility supervisors and her recruiter, Crystal Shaffner. She was nominated not only for her life-saving efforts in the incident earlier this summer, but also for the excellent level of care she provides to her patients throughout the duration of her travel nursing assignment in New Orleans.

Do you know an a deserving Advantage Medical Professional nurse? Nominate them here!

“Sandi has been very communicative throughout my onboarding process and has quickly answered all my questions throughout. I would definitely recommend her to others.”

“Joscelyn was prompt, understanding, and made the whole process so easy to understand! Very personable and consistent with communication! 10/10 and would highly recommend her to anyone looking for a travel contract!”

“Amy has always been very helpful and very supportive in everything I need as a travel Psych RN. Amy also listens with empathy when I have concerns with my assignments and she always makes me feel better being heard. Thank you so much Amy for being such an awesome and outstanding recruiter!”

“Barbie has kept in touch with me for quite a while and continued to send me information on travel assignments until she found one that gave me the perfect work/life balance. She is the absolute best!!”

“Katrina is the best recruiter I’ve had. She goes above and beyond her call of duty. I even brag to my coworkers about her checking on me and how I gained a new family member. She is top tier.”

“This is my first time going on a travel assignment and I must say the process was a breeze thanks to Jay. He was there every step of the way and answered all my questions promptly.”

“Pam is a great recruiter. She responds in a timely manner and resolves any issues quickly. I love her professional, positive attitude.”

“Chris always responds quickly during the week, weekend or even when he is on vacation, he’s always available. He is courteous, friendly, always looking to find the best package for me.”

“I originally spoke with Aerin but chose another agency for my first contract. Aerin still kept in contact with me while I was working with the other agency – I actually spoke with her more than my actual recruiter. When I finished that contract, I knew my next contract would be with Aerin. She is a wonderful person to work with and puts me at ease. I wish I had went with her from the beginning.”

“Amy is my first recruiter ever and I am so blessed to have her! She has gone above and beyond for me more times than I can count. Truly the best!!”

“Erica is amazing! She always keeps in touch and checks on me no matter if I’m on assignment with her or not.”

“Roxanne is very sweet, patient, professional and polite! She made that assignment better for me after speaking with her/texting me after extremely crucial shifts!”

“Barbie treats you like family and is always making sure that things are going good on my end; and when you get recognized by the job, she always cheers you on.”

“Nancy is definitely the best recruiter I have had since I started. She is knowledgeable, understanding, sincere. She checks on me weekly and is truly genuine. So glad I’m with you!”

“AMP has been a phenomenal company to work for. Their service to their employees is top notch. My recruiter is exceptional and has always been there for any needs or questions I have.”

“Chris is very knowledgeable and helpful. He is the best recruiter I have ever had the pleasure of working with. He follows up quickly and thoroughly. I will continue to work with him as my recruiter in my agency nursing career.”

“Joscelyn was so professional and encouraging throughout my introduction to travel nursing. She is an amazing asset to help give guidance through a pretty intricate process. She was always available to help with any questions and willing to listen to my needs and concerns. I cannot recommend or thank her enough.”

“Katrina listens to my needs and always finds the right assignments for me. Katrina’s easy to talk to and always available. Thank you Katrina for being my recruiter!”

“Nancy is a great recruiter! She answers questions in a timely manner, understands your needs and wants, and makes sure you are happy with your assignment. She is always a phone call away if you ever need anything. She loves her job and is very kind. I would recommend her to anyone looking to do travel.”

“I am very satisfied with my recruiter Jay. He kept me well informed about my assignment that has been ongoing and I would definitely recommend my nurse friends to him.”

“Pam is by far my favorite person ever (besides my parents and the man upstairs himself). She helped me all the way through navigating my first travel contract and really helped ease any anxieties I had.”

“I started communicating with Sandi several months ago and when the time came, she was all about the business – meaning, she made it happen! I’m so thankful that she hung around for me! She kept in touch with me even when I was on another assignment and was ready to help when I needed her. I look forward to continuing our work relationship. I will definitely refer my friends to her!”

“Rick is an awesome and amazing recruiter! He goes above and beyond for his recruits. I’m blessed to have him as my recruiter and look forward to working when him more in the future!”

“Christy is a wonderful, knowledgeable, compassionate recruiter. She has made my first travel assignment so easy.”

“Crystal is very responsive! She has been very helpful from the beginning and throughout the duration. Definitely would refer her to my nursing colleagues.”